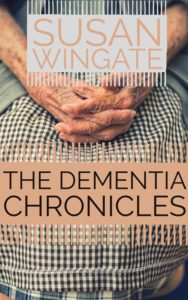 ABOUT AMIE, by Susan Wingate

I started blogging about my Mom, Amie, after she moved in with us―after the Alzheimer’s, the congestive obstructive pulmonary disease (COPD), and the schizophrenia nearly killed her living alone. I wrote close to twenty-five posts, after which, I compiled them into my book, The Dementia Chronicles. I hoped our story would help others who found themselves as a caregiver for someone they loved.

During a visit from Phoenix with my sister and grandmother, Mom fell down the last step of our stairs and broke her hip. Within two years of that visit, Mom had moved from Phoenix to Friday Harbor, Washington to live in a separate home on our island property.

Back in May 2003, on our wedding day, Bob had to assist my Mom to walk a mere five-hundred feet from her house to our backyard where we held the ceremony. A month later, Mom was in the ER experiencing her first respiratory attack after having smoked for fifty years.

For a spell, Mom kept at bay what doctors later diagnosed as COPD. In 2010, during another visit to the ER, x-rays showed scarring within and around her bronchial tubes, invading her lungs. Mom declined steadily after that with cognition red flags frequently appearing.

By 2013, she complained of electricians stealing her checks, hackers breaking into her old college records and stealing her social security number―two of the many stand-out issues she insisted were true. By September 2014, she could no longer drive so we disabled the car engine and lied to her, telling her the car was broken and that I would drive her anywhere she wanted to go.

Mom was furious. Her anger became exacerbated, exhibited by bouts of paranoia and more detailed hallucinations. As she grew physically weaker, we knew we had to move her into our home. So, in November 2014 we set out to revamp our garage into a studio apartment. It turned out beautifully―complete with an enormous stone fireplace to keep her warm. It was so wonderful, my husband, Bob, threatened to move down there himself.

Mom fought against the move, but the only other choice was putting her into a memory care facility. With few choices on the island where we live, she would have gone to a facility on the mainland―a four-hour ferry ride or costly thirty-minute flight away – not viable options.

After transitioning her to the studio apartment, Mom tried to escape. I found her huddled by our front door gasping for air, holding her cane and, sitting dutifully next to her dog, Teddy, his own leash in-hand.

But, the hallucinations grew stronger.

Within a month of the move, the big hallucination occurred. She believed someone had snuck into her apartment, shimmied across the floor on his back over to her fireplace and had stuffed crumpled newspaper into the chimney flue causing smoke to billow. It was a cold October but she opened all her windows to air out the room anyway. There was no smoke. There was no man stuffing newspaper. What there were, were sounds―tinny “plunks” whenever the gas fireplace kicked on and off.

After a month of fighting the hallucinations and failing, I started Mom on anti-psychotics and anti-anxiety meds. Within a few days, the visions calmed.

When she normalized, I learned many things, like, how much Mom loved grilled cheese sandwiches and chocolate shakes. The in-home nurses told me I had earned an unofficial OTJ nursing degree.

One month later, after I finally figured out how to manage our lives with Mom’s, she died. I didn’t go out or to church for four months.

I still have moments when I hear Mom call for me―that’s how PTSD is. I remember screaming, anger flaring about anything and everything for six months after she died―fortunately, it was short-lived. But this is the thing, if I had a choice to do it again, I’d do it all over, the same way, but with more chocolate shakes and grilled cheese sandwiches for Mom.

Susan Wingate is a #1 Amazon bestselling author of over fifteen novels, many of which are award-winners. She writes across both fiction and nonfiction genres and typically sets her stories in the Pacific Northwest where she is the president of a local authors association. She writes full-time and lives in Washington State with her husband, Bob.

This entry was posted in 21st Century Living, Alzheimer's/Dementia, Caregiving and tagged caring for parents, COPD. 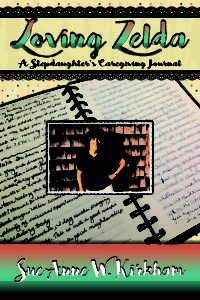