REQUIEM FOR THE STATUS QUO

Requiem for the status quo was published in 2017. You can purchase Requiem at your favorite bookstore, as well as on Amazon. My current work in progress will be published in 2020. 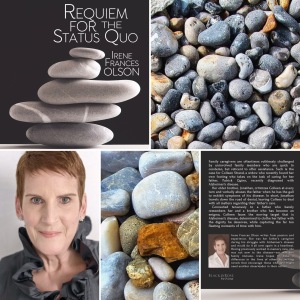 REQUIEM FOR THE STATUS QUO (68,000 words) is contemporary fiction that portrays Irish-American family drama with an extremely contemporary theme.

A recent Alzheimer’s Association report states that 65% of family caregivers of people with Alzheimer’s disease are women. Colleen Strand is one of them.

A widow who recently found her own footing, Colleen is determined to keep her father safe in his own home as long as possible. The unpredictability of the disease requires that she marshal her limited resources to balance her work and personal life with Patrick’s increasing care needs. A new love interest in Colleen’s life couldn’t have come at a worse time; her best friend argues just the opposite is true.

The family caregiver is oftentimes ruthlessly challenged by uninvolved family members who are quick to condemn the caregiver’s efforts but reticent to offer assistance. That is the case for Colleen whose older brother, Jonathan, criticizes her at every turn, and even worse, verbally abuses his father when the older gentleman has the gall to exhibit symptoms in his presence. When an emergency arises requiring her brother to step in, Colleen anticipates the start of a supportive sibling care partnership. Instead, her brother is surly and offensive towards his sister and father. Colleen can take what Jonathan dishes out, but won’t abide his intolerant behavior directed at their father.

Connected tenuously to a father who barely remembers her and a brother who has become an enigma, Colleen faces the moving target that is Alzheimer’s disease, determined not to let it get the best of her or her father.

I am pleased to be a member of AlzAuthors, a compendium of authors who, like myself, have published works about Alzheimer’s and other dementia.